Biden’s War Of The Worlds 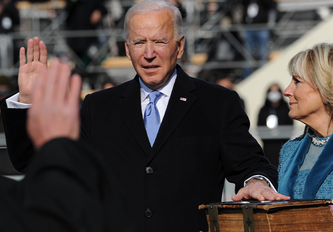 Unfortunately, the threat of nuclear war looms as possible today as it did when I was a child. I no longer practice hiding under my desk whenever a siren goes off, but I shudder to read Vladimir Putin’s cavalier talk about using nuclear weapons against Ukraine in his stalemated war.  As I write, President Joe Biden is meeting with NATO allies in Brussels to develop a plan if the dictator follows through with his threat. Atomic radiation knows no geographic boundaries, so he’s wise to contemplate the worst.

Will Biden’s diplomacy and the West’s economic sanctions reign in Putin? Having no way to determine the state of the dictator’s mind, Biden is forced to guess. Is his opponent mad or desperate enough to do anything to save face?  One journalist suggests Putin’s swollen face may be due to steroids and that he is unwell.  (“Putin vs. NATO” The Week, March 18, 2022. pg. 6.)  U. S. Senator Marco Rubio puts these questions succinctly.  “It’s pretty obvious that something is off.” (Ibid, pg. 6)

So far, not knowing how to coax Putin down from his limb, Biden has played a cautious hand. That caution has frustrated some.  Even those who approve of his strategy would like him to do more. In the main, a majority of Americans approve of his approach.

They also support how he’s handled the pandemic. Sabotaging his total success are anti-vaxxers who also refuse to wear masks. As a result, the virus continues to mutate and pose a threat to the nation’s health.  Another internal problem Biden faces is the aftermath of the January 6, 2021 insurrection.  Key participants in this attempt to overthrow the government have suffered few consequences. Some plan to run for public office. They’ll find friends waiting for them should they succeed, other Congressional men and women who defended and possibly abetted the assault.

If the conflict in the real world wasn’t enough on Biden’s plate, he faces increasing disturbances in the virtual one. Cyberspace is a place where wars are fought by individuals as well as nations. Tech giants like Microsoft are vulnerable to extortion rings. Likewise, Greece’s postal service suffered an assault. To deal with ransomware problems, Biden has taken a unified approach, just as he has with NATO  He’s rallied other nations to join the U. S. in tackling the problem.

Will it work? Unlike geographic battlegrounds where terrain dictates strategies, the virtual world poses no similar impediments. Assault methods are infinite, and they constantly change Take passwords, for example. In a growing number of cases, cybercriminals no longer need to crack them. They enter sites via hashtags.  Complex combinations of letters, numbers, and symbols may no longer deter a thief.  If we look closer, many of these hackers come from Russia, a point where the real and virtual worlds converge.

Biden’s dilemma is how to promote peace in both realms, a task complicated when insanity passes for the norm.  A recent NPR/PBS poll shows Biden is losing public approval.  They may applaud his handling of the pandemic, his statesmanship concerning the Ukraine war, feel more secure now that he’s reinvigorated NATO, passed a landmark infrastructure bill, appointed the first Black woman to the Supreme Court, and presides over a booming economy. Evens so, they see his first year in office as a failure.

I disagree with that assessment. Since his election, I sleep better than I did when his predecessor was in office. Those who continue to give him a thumbs down leave me baffled. I’m reminded of a quote attributed to Winston Church. The words weren’t his, but they bear repeating.  “The best argument against democracy is a five-minute talk with the average voter”