What’s In A Label? 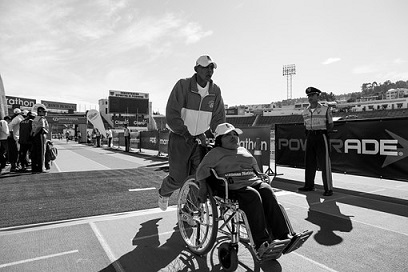 Recently, I had a meeting with a woman about her upcoming presentation at the free summer workshops I give each year. She’s an expert on ways to use video to promote book sales. As we talked, I mentioned the title of an old film, then slapped one hand to my face after I’d done so. “Oh, you’re far too young to have seen that movie.”

“No,” the woman interjected.  “I remember it well. I’m older than I look.”

When she revealed her age, I marveled at her unlined face.  Instead of recognizing she was 54, I put her somewhere in her mid-30s. Naturally, I  congratulated her for beginning a new career in mid-life and said nothing about staring my fourth in my eighties.

A person has to wonder at the marvels science has wrought. Today, the passage of years says less about an individual’s capacity in later life and more about the importance of taking care of one’s health while young.  Bernie Sander, for example, puts the lie to age as he campaigns for President of the United State at 78, having recently rebounded from a heart attack?

So, when does a person become old in today’s society? Gerontologists say most of us don’t slow down until our mid-70s.  I’m approaching my mid-80s and frankly, that marker strikes me as too conservative. I have contemporaries who chase after their grandkids and love doing it. Gloria Steinem is my peer.  One peek at her appearance schedule could wear someone out reading it. Super busy is the description. Never mind that she’s written a new book, as well: The Truth Will Set You Free, But First It Will Piss You Off.

So what’s the new etiquette for referring to an individual whom nature and science have nurtured past the sell-by date?  “Older adult” seems to be gaining social approval.  To be honest, I don’t mind being called old. Age is worthy of respect.  What I won’t tolerate is the box that comes with the label.  No one should put a lid on anyone’s ambition because of age.  I know the road ahead is short and that my arms and legs are growing thin.  Never mind. Until I cross the finish line, I’ll take any trail that tempts me, even if I must ride it in a flaming red wheelchair.