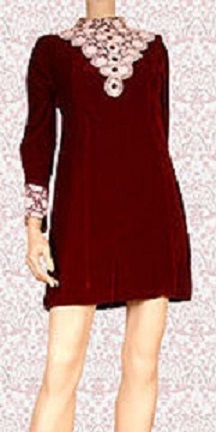 A theory exists in the world of finance that women’s hemlines rise and fall with the stock market.  As I wear sweatpants, the theory is of little use when I buy stocks, but journalist Sam Reed has applied a similar line of reasoning to Amy Coney Barrett’s wardrobe during her Senate confirmation hearing to the U. S. Supreme Court.

Bored by Barrett’s evasive answers, Reed, a woman, began to wonder if the nominee’s vibrant skirted suits and dresses could offer a clue to her political bias. After a couple of days of pondering, Reed decided that it could. Barrett’s manner of dress– pleasing to the eye but conservative– meant to suggest the familiar. She was a woman who knew her place among men even as she reached for a high office. She even smiled instead of gagged when one Senator asked if she did her family’s laundry.

As we know, Barrett is the philosophical opposite of the woman she will replace on the bench, Ruth Bader Ginsberg. So, Reed’s survey might be on the mark. Yet I’m inclined to think it’s of little use as a predictive tool. House Speaker Nancy Pelosi and Senator Diane Feinstein dress similarly as do many women in Congress. If Barrett had worn a see-through blouse to the hearing, that might have called for interpretation. Otherwise, I can draw no more surmise from a woman’s outfit than I can from a man’s suit and tie.

Happily, we needn’t rely on Barrett’s uniform for a glimpse of the future.  We have her judicial record. She’s served a scant three years as a circuit court judge, but her rulings are stunning. Take the case of a 19-year old inmate who sought damages from the county because a prison guard serially raped her and left her pregnant. A lower court awarded the victim several million dollars for her ordeal but  Barret overturned the judgment on appeal. The county, she argued, was guilty of no wrong-doing because the guard who inflicted his brutality upon the victim acted on his own and not in his official capacity.

I pause here to allow anyone who feels compelled to scream about this twisted logic, blatant injustice, and cruelty a moment to do so.

Now, ponder this: if Barrett is appointed to the Supreme Court and votes to overturn The Affordable Care Act, which her prior writing indicates she would, that 19-year old girl or anyone who suffers a similar fate would ineligible for a paid abortion because the pregnancy would be considered a “preexisting condition.”

As to the future, Barrett’s narrow view of reality leaves little room for people with a lifestyle beyond her mindset. Already, she has tipped her hand concerning Transgenders. Asked four years ago if she thought they were protected by Title IX, she replied that to cover them would put a strain on the law.

According to her logic, if these people want to be covered, they can change their  “sexual preference.”

Perhaps it’s time to stop seeing women’s fashion as a guide to the stock market, politics, or much else. If we extended the same courtesy to females as we do to men and tried listening to them, we might grow wiser.