A Tale Of Two Insurrections 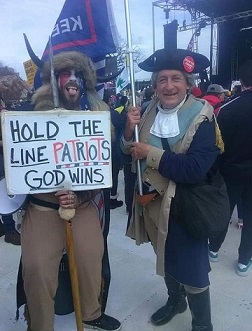 “I love America. I love the people. I didn’t hurt anyone and I didn’t cause any damage in the Chamber.  I got caught up in the moment and when I saw the door to the Chamber open, I walked in…”  These words probably capture the sentiment of many of those who took part in the  January 6, 2021 invasion of the Capital, including Jacob Chansley, a failed actor who lives with his mother and who, since being arrested, refuses to eat jail food because it isn’t organic.  A majority of the crowd came for the rally.  They dressed as if they were attending a Halloween party. Those who wore helmets, bulletproof vests, carried weapons, and zip cuffs had different intentions.

All of them were Donald Trump’s acolytes. and though the president is a chronic liar,  they believed him when he said the 2020 election was rigged. His accusation made them mad as hell. That’s why 15,000  of them gathered at The Ellipse in the President’s Park, at 11 a.m. on Wednesday, determined to strike a blow for democracy.  Trump had promised them a wild day, and so they settled at his feet and drank in his words while he incited them to more anger.  You don’t concede when there’s theft involved.

At last, when he was satisfied by the sea of fists in front of him, he promised to lead them in a march to the Capital where they could air their grievances.  But Trump had no intention of being true to his word.  Instead, he melted away, leaving his sheep to be herded by strangers who had no interest in a peaceful demonstration. They harbored a more sinister agenda.

Was the President complicit in what followed, the storming of the Capital? His promise of a “wild day,” seemed to foreshadow the chaos to come.  What did he know and, if he did, when did he know it?

That question is one that those in authority will have to answer. What the public knows at this moment is that salted among the crowd were armed individuals with a plan that would turn a crowd into a mob and hence into an insurrection.

Are we right to suspect the violence was planned and not the result of spontaneous combustion?  Other law enforcement agencies suspected it was the former.  They had picked up chatter on white supremacist sites and took the initiative to dissuade some of the ring leaders from attending the protest.   One of them was Enrique Tarrio, a Proud Boys leader. He was picked up and arrested for burning a Black Lives Matter banner. Other intelligence turned up more alarming information, enough to prod Maryland’s governor to propose that he send his  National Guard to reinforce the Capital police. Yet despite the mounting evidence that trouble was brewing, the authorities refused offers of assistance.

Was the leadership of that organization guilty of a failure of imagination? Or, was the leadership complicit in the events that unfolded that day? It’s a question, Massachusetts Representative Ayanna Pressley might like answered because on  June 6, while barricaded in her office, she discovered the panic buttons had been removed.  Discoveries like that one,  together with security breaches deep in the building’s interior, have led Congressman James Clyburn to wonder if the outside insurrectionists had inside help.

Given America’s leadership as an international peacekeeper, some of our allies also suspect the January 6 fiasco was an orchestrated attempt to overthrow our government. At the time, the behavior of a few Capital guards gave credence to that suspicion.  One wore a  Mega hat.  Another took selfies with the rioters. The conduct of both policemen cast doubt on their dedication to duty and has led others to point to a disparity in law enforcement behavior when they confront Black Lives Matter demonstrators, behavior which is sometimes violent.

That charge rings true, but the actions of a few shouldn’t tarnish the courage of the line officers on January 6, some of whom were killed or beaten in the course of performing their duty. Nor should the question of race detract us from another and equally important one.  How was it possible that rank and file foot soldiers should be so badly betrayed by the incompetence of  their commanders?

At the moment, all we know is that on Wednesday, January 6, 2021, thousands of people gathered at the Capital and, believing they were patriots, nearly brought our country to its knees.  That they were manipulated, I have no doubt. Yet their ignorance is no excuse because it was willful.  They were given the facts about the election, but they refused to accept them.  Worse, they ignored what’s at the core of our system: for democracy to exist there must be a willingness to concede defeat.

Has this consortium of doubters and haters learned its lesson? I hope so, though some writers are giving them cover. John Davidson of the Federalists says the outrage over January 6 is “phony’ and all about punishing Trump supporters.

Diverting attention from a wrong by impugning the accuser’s motive is nothing new. But it never moves the needle toward reconciliation. For healing to begin let us recognize there is common ground.  Our government served us well on January 6. Brave public servants risked their lives to thwart an insurrection. Officer Eugene Goodman who led a mob away from the Senate chambers should be lauded for his bravery. Officer Brian D. Sicknick did more.  He gave his life. Others showed different courage. They kept cool heads and secured the election ballots so that, in a saner moment, the will of the people would be done.  As for the much-maligned Congress, they, too, did their duty, staying at their post until the last objection was heard and the last ballot accepted.

Time will reveal the names of all who should be thanked or blamed. But at this hour, we would do well to recognize that democracy and freedom of expression pose separate dangers. Together we must reconcile these two forces.  If we fail, our nation dies.