Anatomy Of A Play — XI

by Caroline Miller
"Woman On The Scarlet Beast", the playwright's rule during production
4 Comments

The actors are in place, the stage is set and the curtain on my play, Woman on the Scarlet Beast is about to open.  Whether it will be treated kindly by the public or die in its first performance is something I am unable to predict.  But whether I succeed or fail, I will have achieved my goal, which is to get the play on the boards, the culmination of 30 years’ work.   What I’ve tried to depict in the “Anatomy of a Play” series is the story behind the story, a record of events that might not only interest theatergoers but would be of special importance to new playwrights as well.

By now, it should be clear that mounting a production isn’t easy.  Finding a theater company willing to risk its reputation on a new playwright is more than good luck.  It’s a miracle.  After that, finding the right actors for the parts is a challenge. If they have any experience in the theater, they will have opinions about the play — what works for them and what doesn’t — as will the director and the Artistic Director who heads the company.  All this collaboration may come as a shock to a writer whose natural habitat is a dark cave into which few may enter.  Nonetheless, he or she must be reconciled to the fact that lines will be changed or cut once the play reaches the light of day.  No longer his or hers alone, the writer would be wise to let go of his creation and listen to the contribution of others.

During auditions, this last point is important to remember. I admit, I found it difficult not to have favorites among the actors reading for parts.  But as the writer, I wouldn’t be working directly with the players.  That is the role of the director and so I kept my silence.  I’m glad I did. When the parts were cast, we not only had  accomplished actors for the roles but professionals who knew how to work with one another.  Compatibility is a quality the director looks for but which the writer might not see.  A cast is a team like any other, after all.

As to textural changes, here a writer is  most challenged.  Having lived with a play’s characters, he or she assumes a full knowledge of them.  But there are colorings or insights an actor or a director can provide and to which the creator should listen.  The point of the collaboration is to give the play a full interpretation… to add depth.   To any unknown playwright who may be reading this blog, my advice is to avoid falling in love with your words.  Allow others to contribute to the play and they will be on your side, which is where you want them to be.

Should a writer ever hold his or her ground in defense of the words?  Yes.  But as in life, the battles should be chosen carefully and won with rationale and a heavy dose of charm.  A theater is the convention hall for egos, the author’s among them.  What matters above all else is the play.  The play’s the thing! 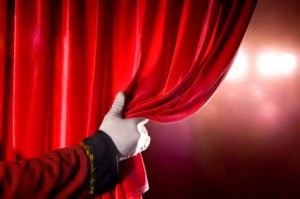