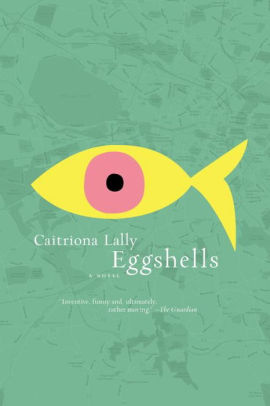 You could read the newspaper clipping as a feminist version of Good Will Hunting.  After a long day at her job as a Janitor at Trinity College in Ireland, Caitríona Ms. Lally arrived home and, while calming her fretting infant, picked up her phone to hear a stunning announcement.  She’d been awarded a prestigious prize, one given annually  a writer under 40 who “shows great talent and exceptional promise.”

She hadn’t applied for the award.  What’s more, her book, Eggshells, had been published four years earlier, in 2015.  True,  one critic had liked it: “…a smartly written and extremely amusing stream of conscious narrative of a mentally disordered woman with a creative and childlike imagination which had me frequently giggle-snorting and barking aloud in mirth.”

But, after that initial spark, the book sat on shop shelves, relatively forgotten.  That she should be chosen for a prize bestowed upon Ireland’s leading luminaries was like winning the national lottery.

Unlike the lottery, however, the award was modest, $11,500.  Nonetheless, it was better than the rejections she was used to receiving.  Besides, the money was enough to install a much-needed water tank in her attic.

With her winnings already spent in her mind, Lailly isn’t about to give up her janitorial job.  She says the work is ideal for a writer – flexible hours with time to be both a mother and the author of a soon-to-be-completed new book. To those hoping for a break like hers, Lally advises they look for a similar job.  One that’s not stressful.

Danielle Steel’s writing life is a world apart from Lally’s.  At 71, this best-selling author of 179 novels has no need for a water tank, but like her younger counterpart, she agrees writing isn’t about money.  It’s about passion.   “Dead or alive, rain or shine, I get to my desk and I do my work.” (“News” The Week, May 31, 2019, pg. 10.)  When the grim reaper comes for her, as Agatha Christie had wished, she hopes to be found face down on her typewriter. (Ibid, pg. 10.)

Most artists understand Steel’s and Lally’s addiction. When an idea flows, its source seems to come from outside oneself, as if an umbilical cord exists between the artist and Creation itself.  Or, as if a match were struck to reveal the stars.  No words can describe it.  It’s a magnificent obsession.