PATRIARCHY SURVIVES IN THE FEMININE HEART 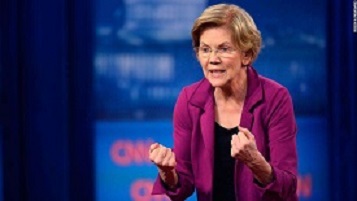 I’m beginning to wonder how far I can roll my eyes to the back of my head before they fall out. After watching the ABC Democratic Presidential debate I begin to despair.  As a whole, I thought it was the best of the series and that the exchange between the candidates shed more light than shadows.  Even so, there appears to have been a gaggle of women in the audience who consciously or unconsciously didn’t want to see a woman succeed. They objected to Elizabeth Warren’s aggressive debate-style and felt more comfortable with Mayor Pete Buttigieg.

To find fault with a woman’s candidacy because of her aggressive delivery, is, to my mind, a form of sexual harassment. The attitude hearkens to an old patriarchal prototype in which a woman, like a child, is to be seen and not heard.

Frankly, like Warren, we should all be shouting about the unequal distribution of wealth in this country.  Six of the top U. S. banks saved $18 billion dollars in taxes this year thanks to Donald Trump’s tax cuts.  (“The Bottom Line,” The Week, January 31, 2020, pg. 32.) Eighteen billion dollars wouldn’t wipe out the  $1.5 trillion outstanding debt from student loans, but it could provide welcome relief to many young people.

The women at the debate were probably mothers with sons and daughters in college. If they could have set aside their prejudice, they might have heard Warren’s message, one with which they would probably agree. Unfortunately in politics, style can trump substance.